/
by Helena Roth
/
in Doing gentle
/
No Comments

I decided to join the #BusinessBoomutmaning (i.e. challenge) in December as well, doing 21 FB Live’s, just like I did in November. This time around, I will be doing my live’s in Swedish, and as an Advent Calendar on the theme of being gentle. But I also wanted to share my current thoughts on this subject here, as this entire site is centered around Being and Doing Gentle. So I will do a written advent calendar here on the blog, in writing sharing what I share in words on Facebook (in Swedish). The background for why I landed in Being Gentle is simply thus: I have spent 75% of my life in the opposite corner, being extremely harsh with myself.

My inner dialogue was hard up until around ten years ago when the following occurred:
I was headed to my therapist, and as I hadn’t taken the time to withdraw cash from the ATM the day before, I went to the small kiosk along the way, with the intent of buying something small and withdrawing cash at the same time. However, as I came there, the phone lines were down, so they could not accept my credit card. Hence… I came to my therapist without cash to pay her. And I felt awful. Horrendous. Disrespectful towards her, with the knowledge that I was a dreadful and despicable person for not living up to my end of the bargain. 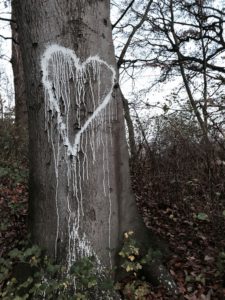 I told her as much… and she looked at me (with the kindest and most curious of gazes) and stated the obvious: You are very hard on yourself.

I nodded, a bit perplexed, and asked: Don’t you have to?

She shrugged her shoulders, and said, gently: No. If it had been me, I would simply have said that I’ll bring double the money next time.

And, like the wrecking ball that Miley Cyrus sings about, my beliefs shattered. The beliefs that I had to be hard on myself… or perhaps rather, the belief that that was the only way to be me in the world. All of a sudden, I got a glimpse that perhaps there was another way of talking to myself, one that did not make me feel so bad, much (most…) of the time.

From then on, I have worked at transforming the ingrained habits of 30+ years of living life being hard on myself, into living a life of being gentle towards myself. Have found ways of being and doing gentle towards myself, and today, wholeheartedly, I can say: I like being me. I enjoy the way I am with myself, and how I show up as me. And I love myself. But that was not the basis for this transformation, that has been a bonus effect!