Defense mechanisms.
How powerful they are.
They run automatically in situations where something (what? The soul? My psyche? That which is beyond human, the greater force behind all in the universe, Mind?) triggers me. Runs to protect me. It’s like a script triggered by a series of logical if-this-then-that-sequences gets flipped into action, and bam, I am no longer consciously running the show that is my life, but rather a passive bystander, possibly bearing witness. More likely a puppet, arms, and legs flailing, a defense mechanism in full swing.

How grateful I am that they exist, as they do what they are named for. They do defend me. Once in awhile though, they are triggered by a faulty sequence, having me defending myself, when there is nothing – or no-one – to defend myself against. I can also learn to go into a specific defense mechanism because it’s come to be a habit. Serving a purpose once upon a time, but no more. Where the trigger switch is a remnant of days long gone, making me react on a faulty premise.

I like observing. Myself. Others. Individual as well as group dynamics. Sometimes it’s hard not to ache for those whos defense mechanisms no longer defends them. Quite the opposite. The defense mechanism of old has turned into a self-inflicting wound of today, triggered, again and again. 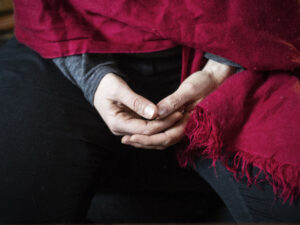 Without the power of observation and the habit of reflection (and doing gentle, by God, doing gentle towards oneself while reflecting!) it must feel like being repeatedly stabbed by a knife. Over. And over.

This has been me. I realize. As I write.

Perhaps there’s some trace of this behavior left in me… but it’s not prevalent. It’s not something which, when I look within, I can put a finger on and say Oh yeah, that thing, yes, that happens quite often. I don’t have any of those left, at least not in the way I live my life today. Perhaps there would be if my circumstances shifted. But they haven’t. So there aren’t any big ones left, so to speak. Not in me. But I do see it in others.

And it pains me. I try to stick to empathizing, as I do not want to sympathize. I do not want to pity or belittle. I try to take care of the pains I experience myself. Not always easy when I am pained on behalf of someone else. Well worth the effort though. What helps me stay centered is the adage from Byron Katie of My business, your business, God’s business. Some things are simply not mine to deal with.