Just finished my second Mastermind call, with the group I have initiated. Second one-hour call of a total of thirteen, running from August till the end of October, on a weekly basis. Four participants, and me as moderator. 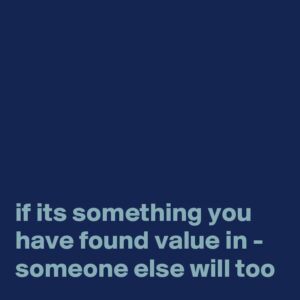 The fun part is, I sent invitations for this Mastermind, on the fly. Dave the coach gave me a challenge to ”take action” during a coaching call early June, and this was what came to me: I want to start a Mastermind group for coaches and/or people interested in coaching.

When I sent out the email invites, then and there, I had nothing planned, except ”a three-month Mastermind”. I didn’t have a set starting date, no plan for content or anything really. Except, of course, six and a half years of being an active participant in my own Mastermind-group, which, as my wise friend Caspian pointed out, certainly means I am extremely grounded in the Mastermind concept as such. Had it been something which I have no experience or expertise in, I would not have made this type of invitation, that’s for sure.

So.
Just do it, on the fly.
Throw something out into the world.
Chances are (quite good actually) that if it’s something you have found value in – someone else will too.

Professional capital – Transforming teaching in every school (book 2 of 12)

A matter of perspective