At long last, a few weeks late, but hey, better late than never. Here’s book number ten of my English book-reading-challenge of the year: Don’t Panic (or why The World No Longer Looks Like Your World) by Lotta Alsén and Troed Troedson is a book I will be rereading. And referencing. And lend to friends, so they can read it as well. I’ve jotted down notes in the margin on 55 of the 285 pages of the book. 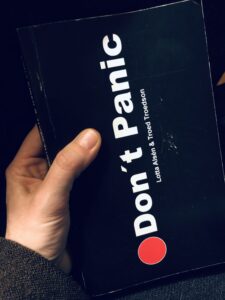 “Effect is the outcome of the result. The interesting thing from a systems perspective is not how the result turns out, but how we measure it. It is critical that we measure the effect and describe it in exactly the same terms as the goal. Otherwise, the system will slowly produce something different than that which was intended. If the goal and the outcome are not described in the same terms, the entire enterprise will gradually warp and run askew. Eventually, you’re producing in order to achieve the effect that’s measured instead of the goal you set up from the beginning. If a school system’s goal is ‘responsible and independent contributors to society’, then it had better not measure its results in terms of, say, knowledge and test scores. If it does, the school will get so bent out of shape that it will become impossible to see the connection between the goals outlined in the school’s mission, and the results that the system produces.”

Having spent many an hour this past decade talking about, dissecting and questioning the school systems of Sweden (and the world at large), there are many gold nuggets in Don’t panic. This is one reason why I will be lending the book to some friends of mine working within the school system.

“The level of knowledge and education among the average adult is now, for the first time, at parity with (and increasingly higher than) teachers and school administrators. Where are the best places for fifteen-year-olds to meet interesting people who can give them new ideas about what life to lead and careers? Probably not in schools. The progression is predictable, inevitable, and irreversible: the 150-year-old revolution of universal education has now come to its end.

This might seem threatening or pessimistic. On the contrary, this is a sign that we succeeded! The only way a school could keep on working, century after century, with the same rationale would be if it completely failed in its original goal.”

But there are plenty of other nuggets of gold in the book as well, giving me ample reason to dig into it further on now, as I am busy developing #tankespjärn. One of the pointers of the book (see below) is one of my foremost hindrances at the moment. My schedule is jam-packed, and I simply have not scheduled (or honored…) enough “empty time” for myself: “Efficiency is the enemy of flexibility and creativity. When you’re efficient, you’ve left yourself no empty time: the time when you are creative.”

A sign as good as any, and one I am getting from many sources right now:
I am not giving myself enough (empty) time for being creative. Are you?