Bruce – more than meets the ear and eye

Bruce – more than meets the ear and eye

/
by Helena Roth
/
in Throwback
/
No Comments

I love reading. I especially love reading biographies and have done ever since I was a child (or at least a teenager). So when I browsed the local library a few weeks ago, and spotted Bruce, I borrowed it and brought it home to read.

And what a book! It’s a well written biography, and despite the enormous amount of facts present in the book, it’s a joy to read, and doesn’t feel as information-laden as it actually is. But what really made me enjoy this book was Bruce himself. What a story. What a character. And jeez, what a skilled person, in his craft. Gifted musician, extremely (!!!) productive composer, and a very special singer, with a distinct voice.

Born to run is an album my older brother introduced me to when I was a kid, which was my entryway to Bruce Springsteen, and in a sense, I never got past it. I still think it’s the best he’s done, and Jungleland is, to this day, one of my absolute favorite songs. In my teens I listened to it over and over, drawn to the drama of the story, the varying sounds and atmospheres, and the powerful feeling of the entire song. But it’s been a while since I listened to it, so when I came upon the part of the book telling the story of the creation of that specific album, I immediately found it on Spotify, and started to listen. And did so with a new sensation, a deeper background, an understanding making me hear more in each song, picking up on the feeling behind, that which is sensed rather than heard.

While reading this book, a feeling grew stronger and stronger within me:
People are not what they seem to be. There’s so much more to each and every one of us, than what is apparent on the outside.

Even though this is not an autobiography, I got many glimpses of the person behind the public figure of Bruce Springsteen aka The Boss. And my reverie grew, page after page. For Bruce. His father, mother, grandparents. For people who tries to make the best of what they got, even when their best is far from sufficient… For the talented people walking alongside Bruce throughout his career. And for the audience, the listeners, the fans.

As I read, my reverie grew for human beings. We do try to make the best of what we get, and sometimes, it turns out absolutely magnificent. Sometimes, we end up with total rubbish, disaster, chaos and dread. Sometimes, the distance between a point of magnificence and a point of disaster is mere millimeters or seconds apart. The high’s and low’s of life. That’s what it is to be human. That is the Human Experience. And no one escapes it. Not me. Not you. Not Bruce. There’s no protection from it, thank God. Because without it, life would not be worth living. Life is made up of moments of high’s and low’s. And every single human being on Earth lives life according to this basic premise.

…..
Outside the street’s on fire
In a real death waltz
Between what’s flesh and what’s fantasy
And the poets down here
Don’t write nothing at all
They just stand back and let it all be
And in the quick of the night
They reach for their moment
And try to make an honest stand
But they wind up wounded
Not even dead
Tonight in Jungleland
…..

Since 2012 I have blogged over at herothecoach.com in a jumble of Swedish and English and this post is a sample of what I’ve been writing there over the years. As of 2016 I only write in Swedish there, and in English here. I hope you enjoy this #ThrowbackThursday, originally published here, and if you do, please subscribe to updates so you won’t miss out on future posts.

/
by Helena Roth
/
in Doing gentle
/
No Comments

Experience your experiences. Fully. Go all in. Let yourself live, love, feel.

No emotions and feelings are wrong. They just are.

Let yourself off the hook to ”feel the right things”. All those ”I should feel this”, ”I definitely shouldn’t feel that”, ”Why can’t I feel this instead”-thoughts. Ask yourself. How do they serve you, these thoughts?

What if you let yourself feel what you feel, without putting a whole lot of pressure on yourself for feeling the right or wrong things? I believe that makes for a much better place to make a conscious decision on what serves you, what the next step might or might not be, than beating yourself up for feeling the wrong thing. 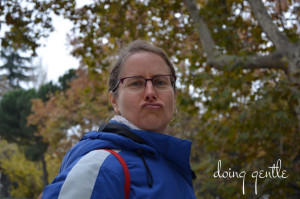 Cry, when tears start to form at the corner of your eye.

Shout, when there’s a shout wanting to escape your throat.

Make a funny face, when the urge hits you!

But yeah. Of course. Sometimes, it might not be appropriate. Then let yourself make a conscious choice to hold back. You are wise, you know when it’s ok to express your feelings and when you should refrain. Don’t beat yourself up for wanting to giggle during a funeral., if the urge comes over you. But, perhaps, hold back on the giggle. You can giggle inwards, if you feel the need for it. Don’t beat yourself up for feeling what you feel. Let yourself feel whatever comes to you.

The Human Experience consists of a full rainbow of emotions and feelings. Don’t sell yourself short. Let yourself have the full human experience. That’s why we are here, as humans. To be human.