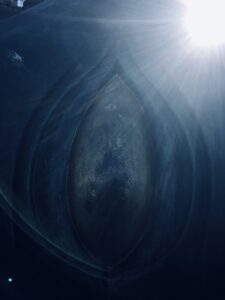 Watching 100 vaginas. Three-quarters of an hour-long documentary on Laura Dodsworth. It’s not at all about vaginas though, but of vulvas. The difference between a vagina and a vulva?

Did you know the difference (without googling)?
Up until a few years ago, I wouldn’t have been able to answer that question. Perhaps, you, like me, thought it was more or less a same same but different relationship between the two? (But no. Not at all. The vulva are the outer genitalia, and the vagina is the birth canal between the vulva and the uterus.) Imagine. I did not know…

I mean, I possess both a vulva and a vagina and have done so since I was born in the early 70s. And still, I’ve never really know how it’s all connected.

Which is one of the reasons Laura Dodsworth chose to photograph 100 vulvas (after photographing both 100 breasts and 100 penises). The ignorance is massive.

Did you know that the shape and since of the clitoris (and believe me, the clitoris is way more than that visible little bud blanketed in labia. This is more than I knew.) wasn’t mapped and properly understood (thanks to Dr. Helen O’Connell) until 1998.

So if only because of that: in Sweden 100 vaginas is available on SVT Play until February 2021, so if you read this before then, and reside in Sweden, watch it. If you read this later, or you live somewhere else, google and see if you can catch a viewing of the documentary some other way, or get a hold of the book.