Learn to speak your truth

Learn to speak your truth

Seth Godin prompts everyone to blog every day for sixty days in the final minutes of the podcast Louder than words with John Bonini:

I would suggest that people blog every single day – you don’t even have to put your real name on it – but make a commitment every day to notice something, and write about that thing you noticed in a way that doesn’t benefit you, but benefits someone else. Do that for sixty days, without measuring, just to do it, just to see how it feels, just to be naked. My bet is, if you can start down that path, you might not end up being a blogger, but you will end up as someone who can speak their truth with more confidence. 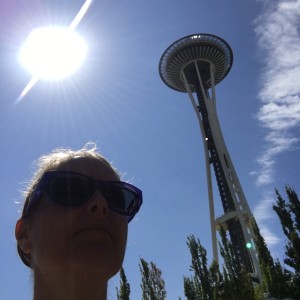 I started my first blog in August 2012 with the intent to do just that, write and share my observations of the world as I saw it. However, my writing was very sporadical, until I stumbled upon a Swedish 100 day blogging-challenge in January 2013. Since then, I have blogged daily, with a few exceptions (the most notable one the recent two week summer holiday I took with my family). I can’t say I’ve written with the specific purpose not to benefit me, but to benefit others. But as it turns out, it has benefitted both me and others, that I know.

For me, writing is the best self-coaching tool around, but I would not do it nearly as mush as I do due to blogging. And I wouldn’t do it as often, if I didn’t have the aim to blog daily.

That way it’s not an issue.
It’s not even a daily choice.

It’s a choice I made once, about something that matters greatly to me. That turns daily blogging into something to execute rather than decide upon. It’s no longer a matter of having time, or having something to write about or whatever other excuse I can come up with, it’s simply something I do. Daily. Sit down, write, post and share.

I have reaped so many benefits from daily blogging, that it would make for a long bullet list. However, Seth sums it up perfectly: Blogging daily has helped turn me into a person who can speak my truth with more confidence.