/
by Helena Roth
/
in Reflection
/
No Comments
Me too.
If all the women who have been sexually harassed or assaulted wrote “Me too” as a status, we might give people a sense of the magnitude of the problem.
Please copy/paste. 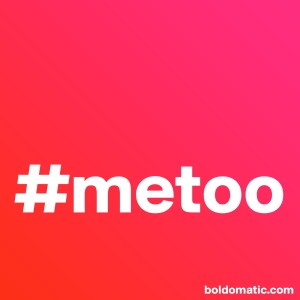 That status has been all over my Facebook-feed these past few days.

I’ve seen it, read it, recognized myself in it (yeah, me too), been slightly overwhelmed at the number of women I know who’ve written “Me too”, and all the while, have hesitated to actually copy/paste and publish on my own wall.

Part of my hesitation is the reason why I do not pass on modern style chain letters, which in the social-media-era takes the shape of personal messages in Messenger, sometimes augmented by a <3 on the walls of the people passing the message on. It would take something quite extraordinary for me to pass this type of stuff on, and with #metoo I guess I’ve come across one of those extraordinary occasions.

If nothing else, simply the fact that I’ve seen so many “Me too” truly has given me a sense of the magnitude of the problem. But what pushed me over the edge to publish the status myself, was my friend Sohrab Fadai, who wrote a reflection upon #metoo that touched me deeply. He wrote it in Swedish, starting off with: My feed is filled with #metoo and once again the male silence becomes embarrassingly obvious.

With the hope that more people will dare to look within and reflect in the same way as Sohrab does in his long post, I will post this on my wall as well.

At school and university.
At work.
On the bus.
At a party (where I actually got punched in the nose).
Walking down the street.
On the train, the plane, the ferry.
At the beach.
In the grocery store.