With or against the natural flow of things?

With or against the natural flow of things?

Thinking about the difference between working hard versus efforting, I am reminded of a story about surfing that I first heard Michael Neill share at Supercoach Academy in 2014.

Doing hard work, going deep within, giving it ones all and showing up, is similar to what a skilled surfer does. She paddles out to sea, spots a wave coming in, positions the board and starts to paddle like craaaaazy, in order to be at the right spot at the right time, ready to go with the flow, be lifted by the wave, using all the energy the universe is throwing at her to move forward.

Paddling out to sea requires a lot of energy, paddling to be in position for the wave does too, and even riding that wave and keeping her balance requires energy. But it’s all in the flow of what is already and always there, underneath, above, below, in front… 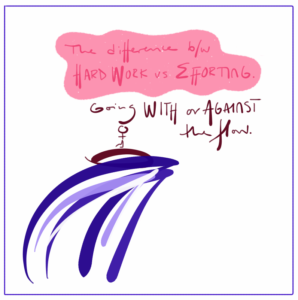 Now. Imagine this surfer trying to work a g a i n s t the flow of the water. Paddling in the opposite direction when the wave is coming. Now that would be efforting, or trying too hard, or, phrasing it differently, not working with what is already there. Working against it, rather than using it to be lifted high on top of that wave crest.

Trying too hard – efforting – has me working against nature, against that which wants to help me, to assist me, to have me spot the flow of things.

That’s one way to spot the difference between working hard versus efforting. There is, always and already, a natural flow of energy in everything. And life can be hard enough, without me going against the natural flow of things. So I try not to.

The Great Misunderstanding (book 22 of 26)

The Great Misunderstanding, by Premananda, is a book that my pod-leader from my Supercoach Academy training in 2014 talked to me about on our third physical meetup, in London. I don’t remember how me and Phil to to talk about it, but as he lives locally, he said he’d bring it the next day, or possibly the next meetup (which took place in Santa Monica a couple of months later), I can’t remember which. Anyhow, both me and Phil forgot, until SCA was over…. so one day, I got a package in the post, and it was this book, gifted me by Phil!

“You don’t have to do anything to be who you are.”

Since then (holy moly, had to count on my fingers, but it’s been f o u r years!), I’ve been planning on reading it, but… you know the drill. I must say, actually reading books I’ve intended to read for years on end has most definitely been one of the greatest perks of my 26 Swedish and 26 English books-challenge. Such a fulfilling side-effect that I will be doing some kind of version of this challenge next year as well!

“Projection means to imagine that another is responsible for something that goes on inside you. If you want to put an end to suffering in your life you have to take responsibility for it. It has nothing to do with anybody out there. Realising that is a very big step because we spend most of our time projecting onto others and blaming them for our misery.
Putting an end to our habit of projection involves looking honestly at our behaviour and patterns, without judgment and opinion. we don’t have to change them; we just have to see them. As soon as they are seen they are not just automatic anymore. We stop being robotic, no longer just victims of our conditioning, and we become present with life as it actually is, not as we imagine it to be.”

Supercoach Academy is grounded in the Three Principles, a simple way of describing that which, in my understanding, is the common thread of most (if not all?) – major – religions, namely the creation and experience of being a human on Earth. This is also what Premananda talks about in The Great Misunderstanding, with a focus on the fact that we are not separate, but rather, we are one. 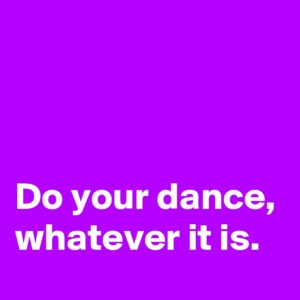 The Great Misunderstanding is an easy read, a mix of input/information, conversations and jokes. All pointing to the same thing, that a strong identification with an ‘I’, to a large extent makes life difficult. Unnecessarily difficult.

“You are here on this planet to be empowered, to be beautiful, to be whoever you are supposed to be and to manifest this in the world. Do your dance, whatever it is. It’s not so difficult. You just have to remember who you are and surrender to that, trust it.”

I like what I read, even though it’s not exactly news to me, any of it. But it points me towards something that I know to be true, that I revel in, a space, a silence, an understanding, that has me “coming home” in a way, remembering who I am, and surrendering to it.

“Life itself is a mirror. […] Everything that happens in life is an opportunity to know yourself. In our modern society most people are simply not interested to know who they really are.”

I don’t know that to be true, that people aren’t interested to know who they really are. I think many are, but feel both scared and alone in this search, not knowing who to look towards, whom to be guided by. It’s like reflection, a practice that most people seem to have forgotten about, forgotten how it’s done, when, why. Possibly it’s the same with “knowing who I am” – there might not be enough people around who are interested in this question (who am I?) and talk about it so we can be inspired and guided by them? I want to believe that, rather than “no one is interested”. 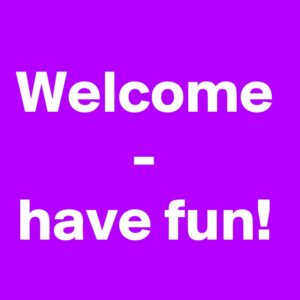 “[…] everybody arrives on this planet with an invitation around their neck saying something like ‘welcome – have fun’, but unfortunately it seems to fall off in many cases.”

Welcome – have fun!
Now isn’t that a lovely way to greet life and every single day with?

Instant motivation – the surprising truth behind what really drives top performance written by Chantal Burns, is a book about “the difference between how we really think and how we think we think” as Rory Sutherland, Vice chairman of Ogilvy & Mather states on the cover of the book.

“All feelings are created by Thought.

Your feelings are the felt experience of the Principle of Thought taking form, moment to moment.

Thought and feeling are inseparable.

Whatever you think, you will feel. Whatever you feel can only ever come from Thought in the moment. This is how the human operating system works.”

It is. 100%. Even though we all, I think, have that special area, where we d o  n o t believe it works this way. But here’s the thing about principles, like for instance the principle of gravity, they are always applicable. There are no “exceptions to the rule” when it comes to principles that govern life on Earth. And the principle of Mind, Thought and Consciousness are just that: principles. 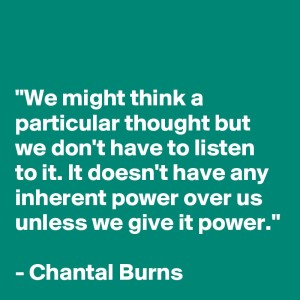 Another way to phrase this is: “The problem is never the problem. The problem is always your thinking about the problem” which Cathy Casey stated during the first Supercoach Academy weekend I attended back in 2014. For me, understanding that my state of mind is the driving force of how I experience my everyday life, and not external factors, has been a huge part in why I enjoy life so much more today than I used to. And more than anything, when I got this: “We might think a particular thought but we don’t have to listen to it. It doesn’t have any inherent power over us unless we give it power.” life shifted in a way that means it will never be the same again.

Oh the relief, when I understood that I didn’t have to listen to and act upon all the really weird and not-so-constructive thoughts that zoomed through my mind! And this is, in essence, what this book is about. Clearly written, easily described, with plenty of examples from real life, it’s an easy way to gain deeper understanding to the human condition and more than that, insight into what shapes the human experience on Earth.

In a love bubble!

Fortyfour years ago I was born, drew my first breath of air and started on a journey that’s taken twists and turns I never could have dreamed of. But they did. And I am both happy and grateful for that, otherwise I wouldn’t be here. And right now, right here, is where I want to be. I love life. Truly love it. I am wrapped in a love bubble that is in constant expansion, encompassing more and more with each passing moment. 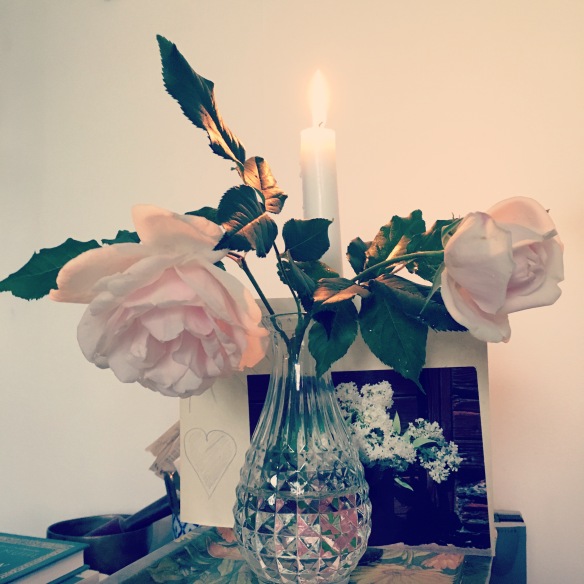 The day started with hubby and kids singing prettily for me, with candle light and the divine scent of the Helenae rose. And once I got out of bed, the day has been mine. I’ve spent the entire day with my beloved family, and they literally bathed me in love. We went swimming, ate falafel, went to the movies and watched Me after you *and boy did I ever cry my heart out*, watched the soccer game between Sweden and Italy while munching on cherries and apricots before eating birthday dinner, made my hubby and kids while I took a love bath on social media.

Because, yes. I reside within a love bubble. For real. The world exploded in a love bubble during the final weekend of Supercoach Academy, and since then it’s fluctuated a bit. Never fully gone from my senses; sometimes very apparent, and once in a while a tad harder to pick up on. But now. It’s never been clearer to me than now. And never have I felt so aligned within my Self, as right now, something my wonderful coach Carla mirrored back at me in our coaching session earlier this week.

Thank you all for being a part of my world – those I brush up against on a daily basis as well as those I more seldom brush up against, but whom are never the less there.

Thanks for meeting me in a world of love, concern, generosity and wholeheartedness.

Thanks for all the love! <3