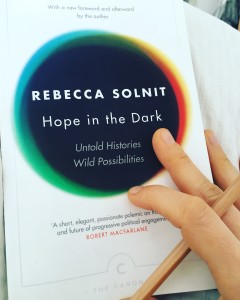 So now that we’ve established what hope is not, what if we try to look at what hope is? Rebecca writes (still just in the very first pages of the foreword to the third edition of Hope in the Dark):

”Hope locates itself in the premises that we don’t know what will happen and that in the spaciousness of uncertainty is room to act. When you recognize uncertainty, you recognize that you may be able to influence the outcomes – you alone or you in concert with a few dozen or several million others. Hope is an embrace of the unknown and the unknowable, an alternative to the certainty of both optimists and pessimists. Optimists think it will all be fine without our involvement; pessimists take the opposite position; both excuse themselves from acting.”

The most impactful part – for me – is this: in the spaciousness of uncertainty is room to act.

The spaciousness of uncertainty – the vast expanse of no-thing that opens up for some-thing to take place, some-thing to enter the arena, to happen, simply because it is time. Not knowing what will come out of it (do we ever? Truly? Know? Believe, think, can logically assume… sure. But know?), if anything. If it will make a positive impact, or just be like a stab in the dark, seemingly pointless?

And then there’s the embrace of the unknown. That’s hard enough for many of us, I posit, so what about embracing the unknowable? That which is not possible to know. As a former control freak (at least ”former” suits most areas of my life today, but I can probably round up a few near and dear ones who would say I am still a staunch control freak in part…) I’ve learned to live in the unknown, to be ok in it, with it, and even better, to actually thrive there. But the unknowable? I’ve never even considered the difference between the unknown and the unknowable, until this very moment. Have you?

#Blogg100 challenge in 2017 – post number 3 of 100.
The book “Hope in the dark” by Rebecca Solnit.
English posts here, Swedish at herothecoach.com.