The Personality Myth is one of my favorite Invisibilia episodes, one I’ve listened to over and over again. There are several threads that are artfully intertwined, shifting from theory and science to personal stories.

Perhaps you’ve heard of the marshmallow test? Walter Mischel is the brain behind the test, and one of the people interviewed in the episode. And he’s adamant, that the “popular belief” of that the marshmallow test showed, is far from the point that he finds most important in the study.

SPIEGEL (one of the show hosts): Basically, over the last two decades, the marshmallow test has become a kind of poster child for the idea that there are specific personality traits that we all have inside of us that are stable and consistent and will determine our lives far into the future.

There is only one tiny problem with this interpretation, as Walter Mischel himself will tell you.

MISCHEL: That iconic story is upside down wrong – that your future is in a marshmallow – because it isn’t. 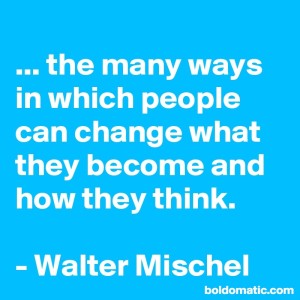 For me, what Walter Mischel points to based on his own research is in perfect sync with my personal experience of me changing. Going from “the most negative person I know, to – if not the most positive – at least a lot more positive than I used to be” is a very real change. Am I the same that I used to be? No. Do I have the same personality that I “used to have”? No. So don’t you try to skirt responsibility by leaning on that old idiom that it’s impossible to teach an old dog a new trick – it’s simply not true. In the words of Mischel himself:

What my life has been about is in showing the potential for human beings to not be the victims of their biographies – not their biological biographies, not their social biographies – and to show, in great detail, the many ways in which people can change what they become and how they think.

Will you tell me?