What’s the most generous assumption that I can make about his response while still acknowledging my own feelings and needs?

Brené Brown is speaking about her husband, telling a story from their marriage. Being vulnerable, and showing all her struggles, her misinterpretations, her expectations and fears.

What’s the most generous assumption that I can make about someone’s response while still acknowledging my own feelings and needs?

What a great question to carry with me, in any setting, any relationship, any conversation with a tendency to turn sour. Because here’s the stinger: it’s all make belief anyway. I mean, whatever assumption I make, I am making an assumption, i.e. making up a reason for what caused you to do what you did, or to omit to do what you should have done. Why not make that assumption as generously as possible, giving me some breathing room and most definitely putting rose-tinted glasses on? Why would I ever do the opposite? Making an assumption that puts you in the worst possible standing in front of my eyes, making you out to be the worst monster on earth – why would I do that? Causing me heartache, and sending that energy right back at you, likely causing you heartache as well. 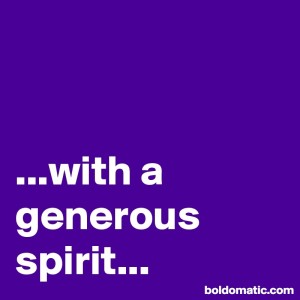 No, better to be generous. As kind as I possibly can. I can experience being snubbed, stood up, taken for granted or any number of other feelings, all of which might hurt, in one way or another. But thinking generous thoughts about your possible reasons for doing – or omitting to doing in some cases – it, makes it less of a problem really. It takes away a lot of the hurt inside. And when I am being generous in my mind, towards you, it’s actually easier for me to act in the same manner towards myself. From that view point, it’s a lot easier, and likely much more constructive, to voice my needs and acknowledge my feelings. When I speak from my perspective, with a generous spirit, I am less likely to cast blame on others and fall into the role of the victim.

I’ll be playing around with this for a while, and I’d love for you to join me:
What’s the most generous assumption that I can make about someone’s response while still acknowledging my own feelings and needs?