“Everybody-friendly, artist-driven, God-optional, all ages” – what do you imagine this is the tagline for? If you are anything like me, you would not in a million years believe it is the tagline of a pop-up synagogue, would you? And yet, that is precicely what it is.

Rabbi Amichai Lau-Lavie in conversation with Krista Tippett on On Being is a hoot of a show under the title “First-aid for spiritual seekers”. I laugh, and I cry, and I feel such gratitute to people who don’t “take things for granted because it’s how it’s been done forever and ever” but rather dare ask Why? And Amichai most certainly is one who dares.

I mean, read this transcript from the conversation: 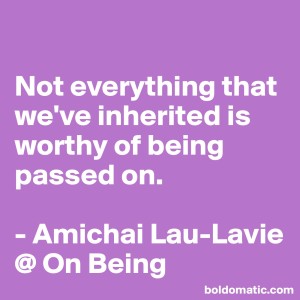 “… I think the words are the black box that contains so many of the ancestral aspirations and truths — and also baggage that needs to be checked. There is an evolution. Not everything that we’ve inherited is worthy of being passed on, like trauma and like memories and like values that have evolved. Part of the reason why I’m not an Orthodox Jew but a flexidox or polydox and otherwise-Jew, and not just “Jew,” is that I do believe in evolution, not just of our species and the world, but of concepts. And if the Bible and the Jewish values that have sustained my people for thousands of years believe that women were subservient and that sexuality was of a specific type and that types of worship included slaughtering animals, we’ve evolved. That’s not where we are. So we need to read some of those sacred words as metaphor, as bygone models, as invitations for creativity, and for sort of the second meaning and the second naïveté here that still retrieves this text as useful and these narratives as holy, not as literal.

I think that is, of course, the conversation between so many of us of different religions who are struggling with our brothers and sisters who choose to read things literally and speak for a Biblical truth that is unalterable, where we — some of us think that there is room here for creativity, for sacred metaphor and change. And we’re not there yet. We’re not there yet for those days of dignity and equality and radical justice that Heschel and Dr. King and so many of our leaders, then and now, are hoping for. And here we are — oh, my God — again?”

I hear Amichai speak this into the world, and I rejoice. I remember listening to this podcast once this summer (because yes, this is another one of those podcasts that I simply cannot get enough of, I listen, and re-listen, over and over again, and each time (!) I get something new from it) while picking raspberries in the garden, filled with gratitude and amazement that there are people who dare to question their tradition – regardless if it’s religious or simply habitual – in a way that is not condemning, but rather ripe with opportunity.

There’s possibility in it the questioning, I perceive doors opening, rather than shutting. There’s a strong sense of exploration, and I love the expansion possible in that endeavor.

I also experience gratitude for Krista Tippett and On Being, discovering and sharing the wisdom of interesting people, whom I would not in a million years ever stumble upon otherwise. So I dare you – if you’ve yet to listen to an On Being-episode, this is a great one to start with! The edited show is great, but the unedited one is even better; rich, filled with humor and wisdom.