Pop the cat.
Lying on the bench underneath the apple tree, with the airs of one who Knows (!) the comfy cushion was brought out by me earlier in the day for his sake (and not for me to take a mid-afternoon nap on).

A dove lands beneath the black mulberry-tree, having me up out of my chair, shooing it away, not wanting to share any ripening mulberries with him (her? How can you tell?). Sit down again, only to hear more dove-commotion, together with the distinct tinkling on Pop’s bell, the small one attached to his collar, giving him a telltale signature sound when he’s approaching. Look over towards the garden beds filled with kale and squash plants, and there’s Pop with two dove’s, one of whom appears ruffled.

Rush over there, shoo at the trio, making the unruffled dove fly away, with Pop running after it. The ruffled one –looks like a youngster– hops away, perching on a stone next to the lime-tree arbor where I have set up my outside office. I sit down and continue to write, but before long, that same telltale sound informs me Pop is approaching. 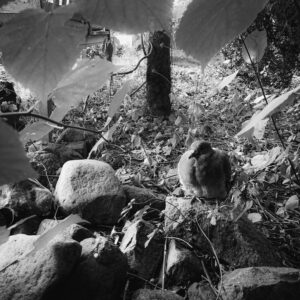 Snatch him up, going into the house to give him his evening meal, and leave him eating. Closing the door firmly behind me, to give the little one some time to recover from the shock of the ordeal, hopefully, able to take off before long. So I sit down again, and lo and behold, all of a sudden it sets off, hopping, underneath the garden table, onto the small stone wall separating my garden from the neighbors, and makes a jump for it, landing, after a few flaps of its wings, in the neighbor garden, hopping away across the lawn.

I don’t particularly care for these doves.
They eat most of my red currants. Some of the gooseberries at that, probably mulberries as well (even though that might be me badmouthing them as I’ve never actually seen them in that tree), and generally poop all over the garden furniture.
But I don’t want them hurt.
Having a free-range cat running loose in the neighborhood, that’s a hypocritical stance to take, as cats are wont to snatch birds and small rodents of varying kinds, but hey… I still don’t have to be an accomplice in the actual deed, do I?