A while back I listened to Isabel Wilkerson on On Being, talking about the Great Migration, which is – and I quote – “the diaspora of six million African Americans to the north of the U.S. in the 20th century“. I listened, and cringed, as I could not ignore my ignorance. I simply did not know, have never thought about, and despite considering myself fairly well-educated, I cannot hide behind the fact that “Western history” to such a large extent is actually “White Western history” at best. That might be an explanation, but it sure isn’t a valid excuse.

So a while back, as me and Jesseca were taking the bus home from a Gifted Book Club-evening, we got to talking and I mentioned Isabel and my urge to read her book, The Warmth of Other Suns. Jesseca immediately jumped on the suggestion, and made that “her book choice” for the book club. We haven’t read the book yet (we’ve yet to discuss Foe by J. M. Coetzee), but I was reminded of this magnificent episode of On Being, and wanted to re-listen to it.

I have recently discovered the series Underground, and it is… horrific. Horrible. Horrendous. Yet, there’s so much hope, heroism and heart as well! I absolutely love the fact that there are such strong female main characters in this show, which in and of itself made me reflect upon my surprise at this – I interpret it as being so unusual on screen, that is the reason why I take such strong notice of it! Anyway, the things we humans do to and with each others can be so disturbing at times, and yet, somehow I want to believe that things are getting better. And they are, to a large extent, but at the same time, they aren’t, for everyone, as these “striking, terrible statistic” that Isabel Wilkerson has noted: […] there was a lynching every four days in the early decades of the 20th century, and it’s been estimated that an African American is now killed by police every two to three days.

Sit with that for a moment or two. It’s more dangerous being black in the US today, than it was a hundred years ago. How??? How is this possible? I just do not (want to) believe it. But those are the facts, however much I would like it to be otherwise. 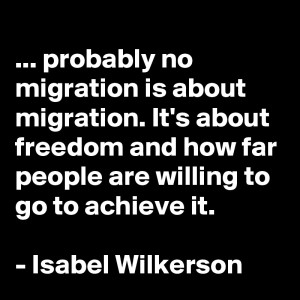 Being legal guardian to unaccompanied minors, as well as involved in a project on migration, I am getting a lot of new perspectives on this on a personal level, interviewing people who have migrated to Sweden (or from their home countries, ending up in Sweden more on chance than by design), for one reason or another, be it war, persecution, famine, love or work. Listening to Isabel, she gives me a point of view that opens the very concept of migration up to me anew: I often say that the book is viewed as being a book about the Great Migration, and over time, as I’ve talked about it over these years, I’ve come to realize that it’s not about migration. The Great Migration is not about migration, and really, probably no migration is about migration. It’s about freedom and how far people are willing to go to achieve it. This is the means that they feel they must take in order to find freedom wherever they can find it.

How to live a good life?

The Great Misunderstanding (book 22 of 26)