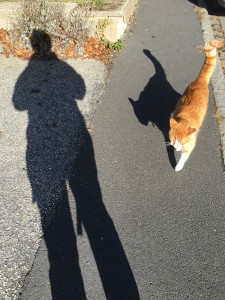 I’m a cat person. Love them, and have since I knew how. Have had cats most of my life, one or more, at most I’ve had three cats at the same time. Bilbo and Bombadil were joined by Pippin when Bilbo went on a walkabout for six weeks and Bombadil was desperate for a pal. So we got Pippin the kitten, and a few weeks later, Bilbo returned. Three cats is actually a lot more than two, somehow. But we made it work.

Have never been able to train my cats much. Walking on a leash is something none of my cats have ever learned. Bilbo would flop down on the floor as if he’d become instantly paralysed whenever I put the leash on him, totally unable to walk. Pop actually knows how…. but he moved in when he was three years old and already knew this skill. Besides that, he will gladly join us for walk around the neighborhood even without a leash, so he’s a special cat, that’s for sure. 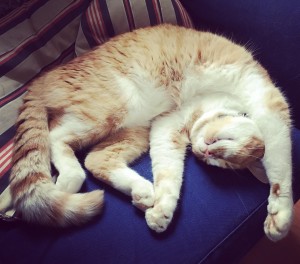 So when I saw the episode title “How to train your cat” on Fresh Air, I was intrigued and started to listen to it. Rapidly I understood, that in reality, I’m the one who’s been trained, by all my cats! They seem to know instinctively how to train their humans to do precisely what they want, whether it’s letting them out at four am, providing more food than planned, petting an upturned hairy tummy or, for that matter, immediately to stop petting that very same upturned hairy tummy. I’m a well-trained human I admit. But this is all about to change, as the podcast actually gave me a new perspective on this. Or perhaps it’s more just to say, I intend to even the odds a bit.

I will no longer let Pop the cat out at four am in the morning when he’s walking around screaming to be let out. Because every time I do, I am reinforcing his knowledge that this is how it works: If i miow loud enough and long enough, she’ll crawl groggily out of bed and let me out. And he did train me well! But no more. 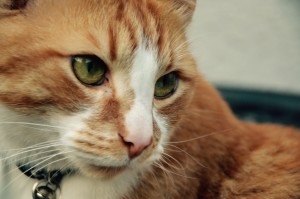 So for a couple of early mornings, when Pop has let me know he want’s to go out (pressing needs perhaps? There is a litter box, he’s in no dire straits, I promise) somewhere around four five am, I’ve not let him out. I’ve invited him up onto the bed, but that’s the extent of my interaction with him in the wee hours of morning. And lo and behold, after a few frustrated minutes walking about, up and down the stairs, miowing, he relents. Sometimes he plonks down on my bed. The other day he chose Almas bed instead. Today he chose the sofa downstairs, so that when I got up around seven and went downstairs to pick up my phone and iPad (morning writing you know), me met me by the front door, and – without him making a sound – I let him out the door.

Same goes for food. Miowing in the past has meant that we relent, and give him some food, more than he actually should receive. If nothing else simply to shut him up. See – he’s trained us well, this cat! But no more. I am on to his training scheme and will refuse to play according to his rules anymore.

What I didn’t get from the podcast, which might be available in the book The trainable cat, is how to get Pop to indicate, with one (1) and only one miow, the desire to be let out and so on, but to stop after the one miow. Because I see him and hear him, and will – unless it’s five am in the morning – oblige. If we reach that point, I would be a very happy cat-owned human, that’s for sure. I’ll see if I can get a hold of that book – the story of me training Pop the cat and vise versa is to be continued…

Learn as you go along 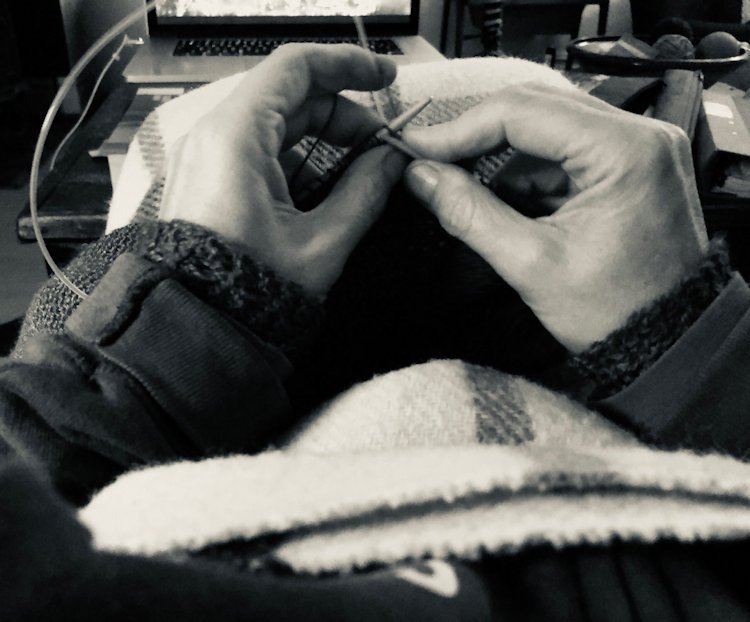